It was cold, and it felt damp, cloudy, plus at the foothills around the AVE Ranch it was raining (you could see it come down nearby but never got to the ranch), to the West, in Tehachapi, it was snowing a bit but none of the spirits were dampened for the 30+ racers and famly members who braved the possibility of rain and came to the 2018 AVE/BP RACING AWARDS, regardless.

The big deal for these awards was that we still had the PURE 300 prizes from October 2018 to give out, and then of course, the Series Championships by Classes.

The Overall Points Champion went to Chris Blais and Jeremy Gray (Navigator). They were awesome all during the year, inspite of a couple of setbacks that would have sidelined most. But it didn't.

Class champions also received their due, although a few did not make the awards. They were:

Josh Wakeland and Merritt Townsend, Pro 1000 Class; Chris Blais and Jeremy Gray in the Pro Turbo Class; Michael Pascarell and slew of Veterans who he helped guide through the season, Ray Kolisz was top Navigator in Class, Tiffaney and Ben Protas too the Sport Turbo Class. Below is the official list of all winners.

However, at the end of the awards Race Promoter, Lou Peralta and wife Lois announced their four special awards, voted only by them and they did not necessarily reflect wins, points or championships. These awards are personal to Lois and Lou only.

The Driver of the Year large glass plaque went to Chris Blais. One hell of a driver all year long after overcoming certain setbacks during the year.

The Navigator of the Year (not present) went to Abel Perez. Anybody who wrenches, changes tires, drives and navigates and in two races had to steer the car with one hand while pulling the throttle with the other, definitely deserves this award!

And, the final award was the Person of the Year went to Michael Pascarella for his year-long effort to buid a formidable team of active Vets. It was a great effort on his part and he truly deserved Lois and Lou's award..

The last two matters were the great Mojave Addict RC off-road kits donated by Tim Moore, who was there to present them.

BBQ was served at Noon, with lots of drinks and Lou's famous Margarita mix were available and by 1 pm the awards got underway.

By 2:00 all the ceremonies were done with and because of the bitter cold, most were in a hurry to get back in their vehicles and either bolt to a warmer place or to check-out the new closed-course track that Lou is building to be part of the dezert series and the Super-C/X Closed-Curse series, which starts in April. 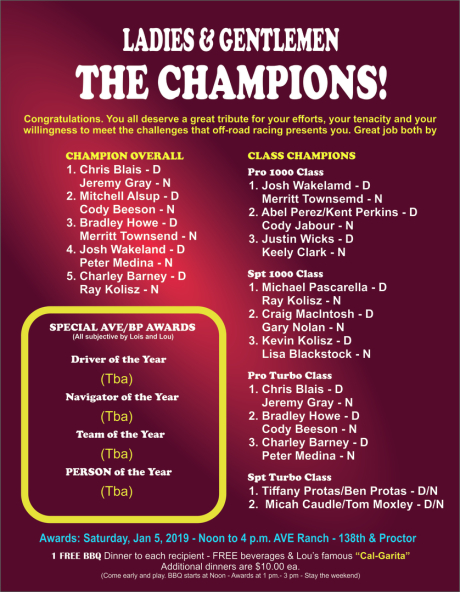